The last national EU HEROES event was held on Thursday 27 August 2020, organized by CRES to disseminate final projects findings at national level. The event was attended by the Centre of Renewable Energy Sources and Energy president, representative of HEDNO SA, the HYPERION Solar Community Vice president, representative of cities network in Greece, municipalities and companies active in the energy sector. The participants concluded that energy communities, most probably in a slightly different framework, could play a role in delivering a just transition, which empowers citizens. 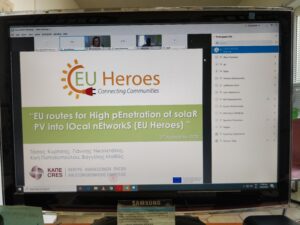